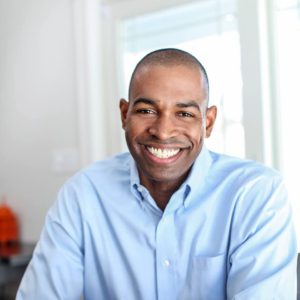 Born and raised in Schenectady, Antonio is a native of upstate New York.  His parents worked for General Electric and benefited from a better regional economy.  They worked hard to pursue the American Dream of building a better future for Antonio and his little brother. Antonio attended Colgate University in Hamilton, New York, where he graduated with high honors and earned a Rhodes Scholarship to Oxford.  From there, he went to law school at Harvard, which is where he met his wife Lacey, a native of Woodstock and Kingston. The values Antonio learned growing up – hard work, discipline, service and character – helped him get a great education, allowed him the opportunity to start his own company that empowered young people to learn through music, and led him to begin a second career as an attorney fighting for what’s fair and just.

Antonio is running for Congress because he remembers the opportunities once available in this region, and knows they helped to make him who he is today. For too long, our leaders in Washington have failed to give voice to working families like the one Antonio grew up in, families that are now struggling to achieve the American Dream.  For too long our politicians have failed to provide a vision forward in an ever changing global economy that’s left thousands in the Hudson Valley and Catskills behind.   Antonio believes in leaders who will listen to the people and not put dollars over our democracy.  We need leaders who are committed to restoring the American Dream.